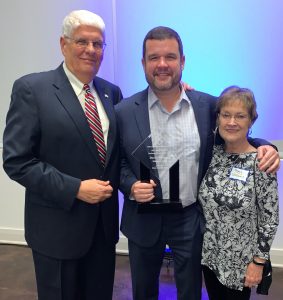 Williams & Fudge, Inc. president David Williams was named the Businessperson of the Year by the York County Regional Chamber of Commerce.

Williams, 43, accepted the award at the Annual Meeting and Awards Dinner on February 6 at the Rock Hill Sports & Events Center, in the Knowledge Park corridor of Rock Hill.

“David’s leadership and commitment to the success of others is tangible and continues to shape our community” said Rob Youngblood, President of York County Regional Chamber of Commerce.  “His work extends beyond Williams & Fudge and into the community where he serves on various boards. The Chamber is a strong proponent of economic growth, of which David is a true champion.”

In his role as president, David oversees daily operations of Williams & Fudge, an established leader in accounts receivable management solutions, partnering with higher education and financial institutions across the nation. Williams is actively engaged with national industry associations and currently serves on the Board of Directors of ACA International.  Since joining Williams & Fudge in 2000, David has served in various roles within the company, including sales and marketing, prior to joining the Executive Management team.

Outside of his role as president of Williams & Fudge, Williams is active in the local community, having served as past chair of the Come-See-Me Festival, President of the Old Town Association, Miracle Park Executive Team, York County Board of Disabilities, York Technical College Foundation and Rock Hill Economic Development Corporation and the Rock Hill Sports Commission. David is Deacon at Oakland Baptist Church and is a youth baseball and basketball coach.

A Rock Hill native, Williams is a 1994 graduate of Northwestern High School and an alumnus of Presbyterian College. He and his wife, Pam, have three children.